Salman Khan-hosted reality shows Bigg Boss 16 is all set to premiere on television screens this October and fans cannot keep calm. The makers of the show have already begun to lock in the celebrities for the show. Some reports claimed that Karan Patel will be participating in the show and his wife Ankita Bhargava reacts to the speculations.

Karan is a well-known actor in the TV industry. He became a household name after playing the role of Raman Bhalla in Yeh Hai Mohabbatein. He also previously participated in the reality show Khatron Ke Khiladi where he faced all the stunts and was the first runner-up in the show.

Ever since reports speculated that Karan Patel will be participating in Bigg Boss 16, his fans were pretty excited about the same and were eagerly waiting to see their favourite star enter the show. But it seems he won’t participate in Salman Khan’s show this time.

At Raju Srivastava’s Funeral, Sunil Pal Gets Asked For A Selfie By A Fan! The Comedian Left In Shock, Here’s How He Reacted

Yes, you read that right! Karan reportedly rejected the offer. His wife Ankita Bhargava Patel took to Instagram stories to set the rumours straight. She wrote that both Ankita and Karan were under the level of excitement of their fans. But Karan participating in Bigg Boss 16 is rumours and he will not be part of the show. She even revealed that something good is coming soon. 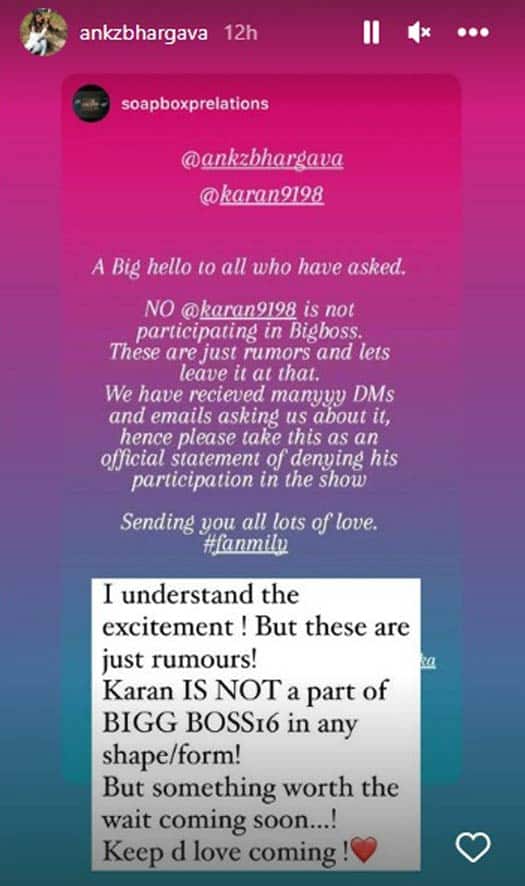 Karan Patel’s PR also spoke about the actor not entering Bigg Boss 16 and said that they are just rumours. They have been receiving messages and emails asking if Karan will be part of Bigg Boss 16. They even shared an official statement and revealed that Karan will not be part of the show.

Some of the other contestants that have been approached by the makers of Bigg Boss 16 are Manya Singh, Tina Dutta, Shivin Narang, Adnan Sheikh, and Madirakshi Munde.