When it comes to the world of cinema, Twitter is where all the real-time action unfolds – be it exclusive first-looks, fan Q&As, or even movie premieres. This week, the service gave cinema buffs yet another #OnlyOnTwitter moment. Yash Raj Films partnered with Twitter to celebrate Ranveer Singh’s upcoming comedy Jayeshbhai Jordaar which is slated to release on 13th May 2022, with his fans around the world.

On Wednesday, May 11th, at 11:00 am, the actor brought his jordaar personality exclusively to Twitter and took over the Twitter Movies (@TwitterMovies) account to engage with his fans worldwide.

Ranveer Singh became the first Bollywood celebrity to do so, joining the likes of Robert Pattinson, Zoe Kravitz, Tom Holland, Nicholas Cage and award-winning cast of Dune to name a few.

During the takeover, Ranveer responded to fan questions submitted using the hashtag #AskRanveer, delighting his Indian as well as international fans on the service. The account’s header image also switched to a Jayeshbhai Jordaar-themed avatar. 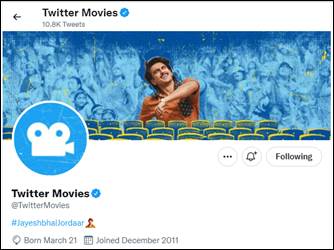 Twitter has even introduced a custom emoji, which fans can activate by Tweeting with the hashtags #JayeshbhaiJordaar, #Jayeshbhai and #Jordaar.

Now here's something #Jordaar for you – A #JayeshbhaiJordaar emoji !!!
Check out my takeover of @TwitterMovies as I answer all of your questions today… ❤️

Talking about the takeover, Ranveer Singh (@RanveerOfficial) said, “My love affair with the movies is fuelled by the passion of my fans – they’re the secret of my energy. And there’s nothing more grounding and lovely than being able to connect with them as intimately as I have been able to because of Twitter. The movie Jayeshbhai Jordaar is a special one, and I can’t wait to share it with our audiences here in India. What better way to kick off release week than a jordaar conversation with the @TwitterMovies fam?”

A few of his interesting video Tweets include:

Manan Mehta, Senior Vice President – Marketing & Merchandising at Yash Raj Films, said, “At YRF, our endeavour is always to try and explore newer opportunities that help market our content to the global audience. With Ranveer Singh leading this journey of Jayeshbhai Jordaar, we wanted to explore something special and one of a kind. And in Twitter, through @TwitterMovies, our team found an ideal partner to explore an idea, that hasn’t been done by any other Indian studio and actor before. We had a great time working with the Twitter global team for this takeover.”

Cheryl-Ann Couto, Head of Partners at Twitter India, shared, “Twitter is the conversational layer of the internet and it connects people with what’s happening in the world of entertainment in real-time. We’re super-charged about our first ever Indian takeover of @TwitterMovies, and marking that with Ranveer Singh’s electrifying presence just makes it even more exciting. The love Ranveer receives from his fans in India and internationally translates evidently on the service and connecting fans with their favourite stars is one of the things we love doing at Twitter.”

Amy Sligh, Senior Social Marketing Lead at Twitter, added, “@TwitterMovies is a one-stop-shop for fans of film on Twitter whether you’re looking for fun memes, hot takes or connecting with your favorite celebrity. Ranveer Singh represents everything we love about movie stars – eclectic, individualistic, unforgettably authentic in every way, and not-to-mention, incredible on Twitter. Exploring this takeover format for the first time ever with an Indian actor, we’re thrilled to surprise and delight his fans with Ranveer reading and answering their Tweets.”

Head over to @TwitterMovies to catch Jayeshbhai, aka Ranveer Singh (@RanveerOfficial) dish on everything – from his favourite movies, film idols, ambitious professional dreams and personal breakthroughs to the unforgettable journey of making Jayeshbhai Jordaar.

Must Read: KRK Calls Akshay Kumar’s Prithviraj Biggest Disaster Of 2022 Even Before Its Release & This Is The Reason