The country has another reason to celebrate Deepika Padukone, who was chosen to be part of the exclusive and very illustrious jury for the 75th Festival De Cannes. 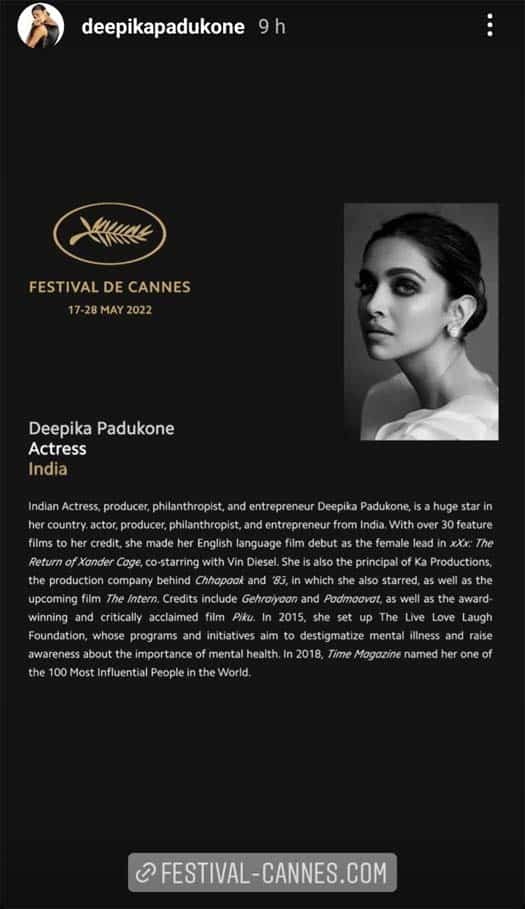 Over the course of her illustrious career, Deepika Padukone has delivered some of the finest performances in Indian cinema, many of which have received critical acclaim and been among the industry’s highest-grossing films of all time. Padukone is also a Two-time TIME honouree for her exemplary work that inspired and influenced millions across the globe.

In a statement to the press, Cannes described the icon as, “ Indian Actress, producer, philanthropist, and entrepreneur Deepika Padukone, is a huge star in her country. actor, producer, philanthropist, and entrepreneur from India. With over 30 feature films to her credit, she made her English language film debut as the female lead in xXx: The Return of Xander Cage, co-starring with Vin Diesel. She is also the principal of Ka Productions, the production company behind Chhapaak and ‘83, in which she also starred, as well as the upcoming film The Intern. Credits include Gehraiyaan and Padmaavat, as well as the award-winning and critically acclaimed film Piku. In 2015, she set up The Live Love Laugh Foundation, whose programs and initiatives aim to destigmatize mental illness and raise awareness about the importance of mental health. In 2018, Time Magazine named her one of the 100 Most Influential People in the World.”

The post Deepika Padukone Is The Only Indian Actor To Join The Exclusive Jury For 75th Cannes Film Festival appeared first on Koimoi.