There are really few shows on Indian television that truly find the much-deserved hype, especially when it comes to the entrepreneur world. But Shark Tank India is currently the talk of the town. The ‘Sharks’ including Ashneer Grover, Aman Gupta, Peyush Bansal amongst others even graced The Kapil Sharma Show recently. Namita Thapar is now giving it back to those criticizing the show.

Shark Tank India is actually inspired by an American show by the same name. Potential investors grace the panel and hear about upcoming entrepreneurs and their business ideas. They invest their money into businesses that interest them.

While the show is grabbing attention all across the country, many are even criticizing it. Shark Namita Thapar, who is the executive director of Emcure Pharmaceuticals, has shared a note reacting to the same. She began, “Last week I heard some names from the startup ecosystem criticize the show. All I would like to say is that they lost a huge opportunity to impact and influence millions of Indians to understand, respect, and take up the entrepreneurial journey.”

Namita Thapar added, “Are there some parts of the show that need improvement? Of course, there are but it’s only season 1 vs other countries like the US where they are on Season 13. So can we stop judging, instead get involved, and help make it better ? This was new for all of us and we learned along the way; we are still internalising and learning. As long as we did this for the right reasons and for the right cause, we will keep working on it and will keep improving.”

Check out the post shared by the Shark Tank panelist below: 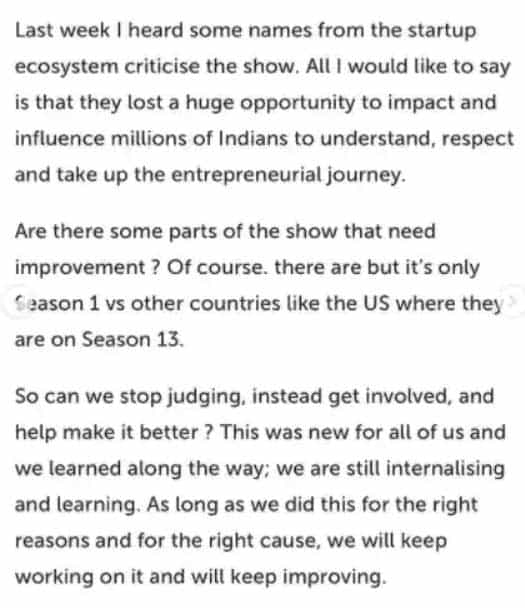