Bollywood actress Kareena Kapoor Khan recently recovered from COVID-19 and has been spending some quality time with her family. From attending family luncheons to relishing desserts with her sister Karisma Kapoor, she has been indulging in treats and sharing pics on Instagram.

The Laal Singh Chaddha actress decided to get back into fitness and is back with her yoga mat. On Thursday, she shared a picture of herself sitting on her yoga mat on her open terrace. However, eagle-eyed netizens allegedly found something wrong with the picture.

Kareena Kapoor Khan in all-black athleisure clothes is seen sitting on a green yoga mat on her terrace, in her kids Taimur Ali Khan and Jeh Ali Khan’s play area. Sharing the picture, she captioned, “Back at my most favourite spot…My yoga Mat with my favourite girl…long road ahead but we can do this oh! is that my car at the back?”

Take a look at Kareena Kapoor Khan’s post below:

Interestingly, Taimur’s mini car is also seen in the background but all netizens could find was Kareena’s left arm which allegedly looks ‘photoshopped’. A user in the comment section asked, “Is her arm edited/ photoshopped or what???” another user replied, “Bro so obvious!” A third user then wrote, “Looks that way.” 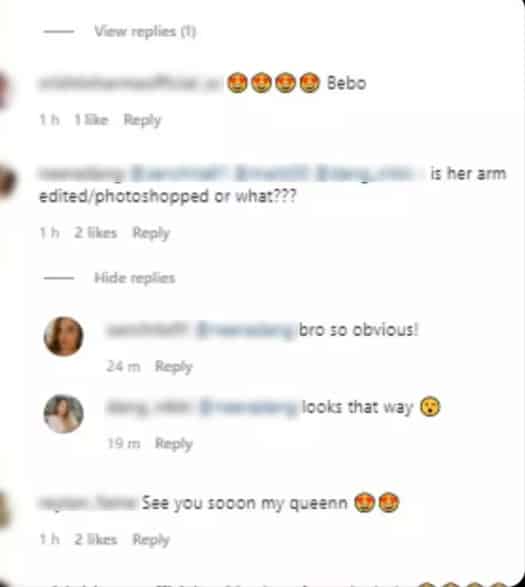 Meanwhile, Kareena Kapoor Khan will be next seen in the Hindi adaption of Hollywood classic Tom Hanks starrer Forrest Gump – Laal Singh Chaddha. The film marks the reunion of Aamir Khan and Kareena after 3 Idiots which was released in 2009.

Must Read: Pushpa Director Sukumar Wants To Work With Akshay Kumar, Reveals Getting Khiladi’s Call Saying “You’ve To Work With Me…”