Hrithik Roshan shared a lovely picture with his mother on Wednesday and shared it on his social media accounts. It was a mirror selfie where he was sitting by the breakfast table and his mother, Pinkie Roshan was standing on the balcony. His fans were quick to notice the damp wall behind him and pointed out the same in the comments, read to know the superstar’s sweet reply to a fan!

Hrithik Roshan took to his Instagram account and shared a picture with his mother, Pinkie Roshan with a caption that read, “On a lazy breakfast date with my mum

Sunday feels on Wednesday are best

Now go give your mom a hug.”

KRK Hits Out At Kangana Ranaut Yet Again Over Thalaivii: “You Do Crap Films”

That’s one lovely picture of Hrithik Roshan with his mother!

Fans were quick to notice the dampness on fall behind him and a user pointed out the same and commented, “Gaur se dekhie Hritik roshan ke ghar me silan

Replying to the fan, the War actor wrote, “Filhaal ghar bhi rent par hai. Apna ghar le raha hu bahut jald (Right now even the house is on rent, I am buying my own house soon”. 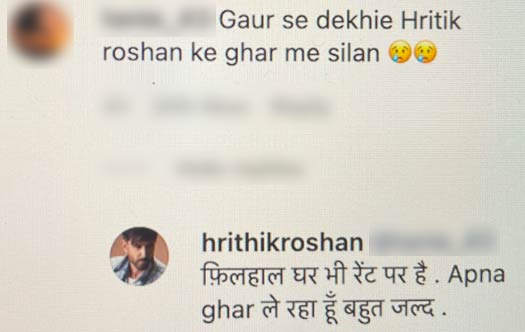 Hrithik Roshan’s reply to the fan is winning hearts all over and we can’t get enough of his kindness.

What are your thoughts on the same? Tell us in the comments below.