Munmun Dutta has made a lot of noise over her personal life lately. The Taarak Mehta Ka Ooltah Chashmah fame actress was rumoured to be dating her co-star Raj Anadkat. The duo shares a great bond but one cannot deny the 9 year age gap between the two. Reports were quashed and the actress is finally willing to move on. Read on for details.

It all began as rumours last week suggested that Munmun and Raj are romantically involved. Just not that, reports suggested that the entire Taarak Mehta Ka Ooltah Chashmah crew is aware about it. Both the involved stars reacted to the reports last Sunday and slammed the ‘cooked up’ stories.

In a lengthy post, Munmun Dutta had slammed the trolls and haters who ripped her dignity in minutes. She also said that she was ashamed to be called a ‘daughter of India.’ But she has now deleted both her posts. Yes, you heard that right.

Check out the story shared by Munmun below: 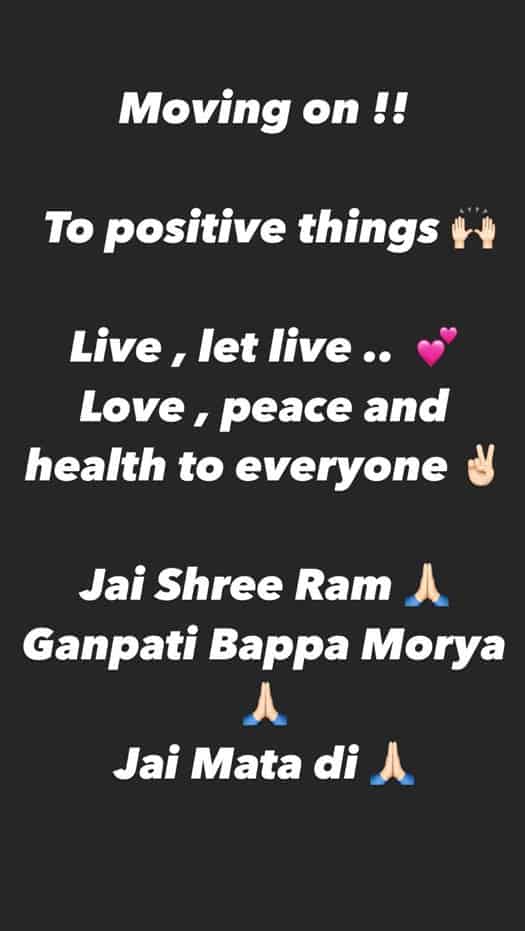 Previously, Raj Anadkat had too slammed the media reports linking him with Munmun Dutta. He took to his Instagram and shared, “To everyone who has been constantly writing about me, THINK of the repercussions that can happen in my life because of your ‘COOKED UP’ (false) stories and that too about my life without any consent. All the creative people out there please channelise your creativity somewhere else it will be helpful to you. May God bless them with good sense.”

Must Read: Nia Sharma Grooves To ‘Do Ghoont’ In Lace Crop Top & Hot Pants At A Mumbai Bar & She’s Too Hot To Handle – Watch