Koimoi Recommends Navarasa: It is one of the most challenging and innovative filmmaking attempts by the bigwigs of Tamil cinema in recent years. However, when you dissect each rasa or emotion through the short films, you realise that not all of them work.

Koimoi Recommends Navarasa: What is it about?

A nine short film, five-hour anthology, Navarasa brings together nine rasa or emotions of Indian dramaturgy that have been translated to the screen by some of the brightest names of Tamil cinema. It was conceptualised as a means to support film industry workers impacted by the Covid-19 lockdown. Interestingly, none of the short films factors the pandemic into its storyline. Three of the films are set in the past.

Karthick Naren’s short film explores the theme of wonder. The film is partly a tribute to Christopher Nolan. The filmmaker delivered a mind-bending science-fiction thriller, in just 30 minutes, that left me awestruck. His story talked about human civilisation to alien life and subconscious reality.

Arvind Swami and Prasanna’s impressive performance kept me at the edge of my seat till the last minute. It left me stunned by the end of it. It is Karthick’s best work to date.

Vasanth S Sai’s short film is based on the theme of disgust set against the backdrop of the Tam-Bram wedding. Vasanth tells the story of one man’s jealousy pushing him to do something that leaves his daughter disgusted. While Delhi Ganesh plays the lead, Rohini and Aditi Balan played supporting roles. Although I felt the story took a predictable route to make its point, Delhi Ganesh’s convincing and impressive performance made me sit through the film.

Arvind Swami makes a smashing debut with the short film that explores the theme of anger. Skilful writing and excellent filmmaking make it the best short film of the anthology. The actor-turned-filmmaker tells the story of an investigation that unravels the mystery of why a young boy knocked down a man with a hammer. As cops investigate to find the reason behind his action, the story cuts back to narrate what pushed him to the edge. Arvind Swami’s directorial kept me glued to the screen till the climax. Moreover, the twist at the ending came as a big surprise. 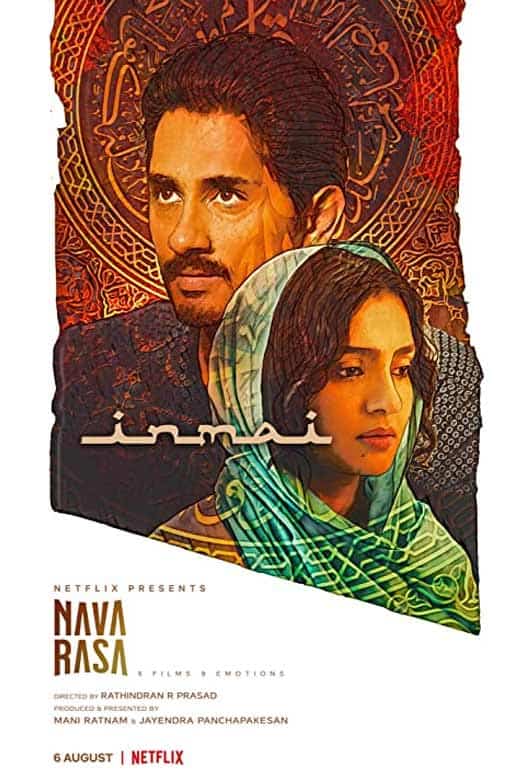 Rathindran Prasad’s short film is based on the theme, fear. Siddharth and Parvathy Thiruvothu come together for a fascinating take on horror. Even though the film touches the usual tropes associated with the horror genre, Rathindran delves deep into what fear truly is for the lead characters. Both Siddharth and Parvathy’s performances were top-notch.

Karthik Subbaraj’s directorial is based on the peace that one has to pay to give up fighting. Set against the backdrop of civil war between LTTE and the Sri Lankan army in the little island nation, the short film is the shortest and the paciest of the nine films. The run time of the film is at 28 minutes.

Subbaraj’s short film focuses on a few LTTE soldiers at an outpost and their encounter with a young boy. While the idea is praiseworthy, but somehow lost in translation. I felt the message of the film wasn’t effective enough to leave an impact. The film features Bobby Simhaa and Gautham Menon in crucial roles; their performance was impressive as well.

Helmed by Sarjun KM, the film explores the mindset of a soldier who was entrusted with the responsibility of transporting an injured Naxalite to a hospital. On the way, the soldier and a Naxalite have an ideological battle inside a jeep. While the conversation may look attractive on paper, but sparks don’t fly during the conversation. The short film ends with an open-ended question of whether saving a life is courageous than taking one? The intention behind the story didn’t quite come through, though.

Not once made me feel like the rise what an actual act of courage should make you feel. Perhaps small ideas don’t really come together to create a riveting whole.

The story, written by ace filmmaker Mani Ratnam, is quite hard to shake off the Roja echoes in these spaces. Even though the film barely matches up to that one. The film stars Atharva Murali and Kishore as the central characters.

Helmed by Bijoy Nambiar, the film is based on the theme of Karuna (compassion). However, it also touches upon themes like guilt and forgiveness. It’s a slow-burning drama that relies heavily on strong performances by Vijay Sethupathi, Revathi and Prakash Raj.

Nambiar’s film tells the story of Sethupathi’s pent up rage, who kills Prakash Raj, and the repercussions faced by the murder and the victim’s wife, Revathy. The film asks the pertinent question of whether a wife can forgive the killer of her husband? The filmmaker ends the story with a twist by transferring remorse from one to the other. The shift was too sudden, and I found it a bit superficial.

However, Revathi and Prakash Raj have given commendable performances in the short film. Sethupathi shines in his minimalistic acting prowess.

Priyadarshan’s directorial tells the story of a successful comedian in Tamil cinema who visits his school to inaugurate its centenary celebrations and proceeds to reveal how much trouble he got into with his teachers. While the film had an interesting premise, it did not evoke much laughter until the end.

The film also seemed to have wasted two talented actors Yogi Babu and Nedumudi Venu. However, a pet dog leaves a quirky mark on a movie. Otherwise, the film lacks genuine humour.

Helmed by Gautam Vasudev Menon, the film explores the theme of love. Suriya and Prayaga Martin play the lead roles. The story centred on a musician and how he gets inspired to get better at his work after meeting a girl.

The story is highly cliched. No matter how much the lead characters strive to bring out the chemistry, everything feels artificial. The film left me drained.

It was painful to see the film made by the filmmaker who gave gems like Khaaka Khaaka, Minnale, Vinnaithaandi Vaaruvaayaa and Vettaiyaadu Vilayaadu, to name a few. The filmmaker seemed to be getting repetitive with his writing.

Must Read: Koimoi Recommends Picasso: A Tribute To An Art Form & Hope That Are Neither Dead Nor Completely Alive